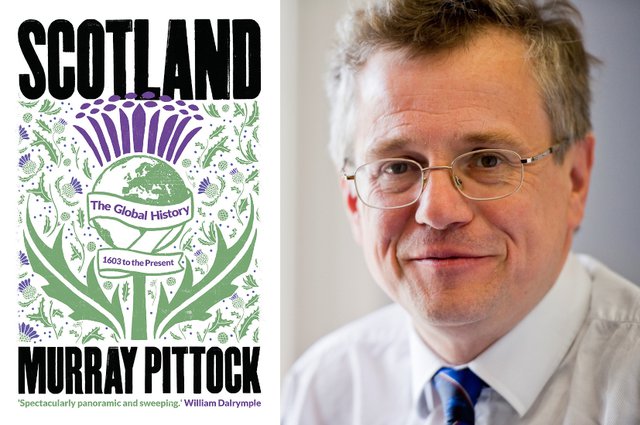 Join us for an evening in the Bookshop, with Scotland’s leading cultural historian. In Scotland: The Global History, 1603 to the Present, Professor Murray Pittock presents Scotland's global history and brand, which has survived and, in many cases, profited from the constitutional and political changes the nation has experienced in the modern period.

Four hundred years ago, Scotland’s king was establishing himself in London as England’s king too. The regal and political unions between these two countries would problematise Scotland’s distinctiveness: how would Scottish identity remain intact, when there was no independent Scottish state to accompany it? As Murray argues in this compelling and insightful discussion, Scottish identity thrived with the emergence of a decidedly global society of emigration, Empire, and Enlightenment. Scots took Scotland around the world - as goods, as ideas, and as experiences - to sustain a recognisably ‘Scottish’ brand, dynamic in its continuity.

At a time when Scotland’s political, social, and cultural independences have gained particular prominence in popular discourse, this event with Professor Pittock invites topical introspection not only of Scotland’s influence by and on the world, but also of the character of its historical tradition. Scottish historian Christopher Whatley has called Murray’s book “a monumental achievement”, sure to “delight, surprise and irritate in equal measure” - consider your response, in the Bookshop, this October.

Professor Murray Pittock holds the Bradley Chair at the University of Glasgow, where he is also Pro-Vice Principal. Since graduating from the Universities of Glasgow and Oxford, respectively, Murray has taught at several academic institutions, including Manchester, Edinburgh, Aberdeen, and Strathclyde, and has held visiting appointments in the US, UK, Ireland and the Czech Republic. A Fellow of the Royal Society of Edinburgh, Member of the European Academy, and prizewinner of the British Academy, Murray is one of Scotland’s foremost living historians, whose previous publications include Culloden, Enlightenment in a Smart City, and The Myth of the Jacobite Clans. In 2022, he is Scotland's Knowledge Exchange Champion of the Year.