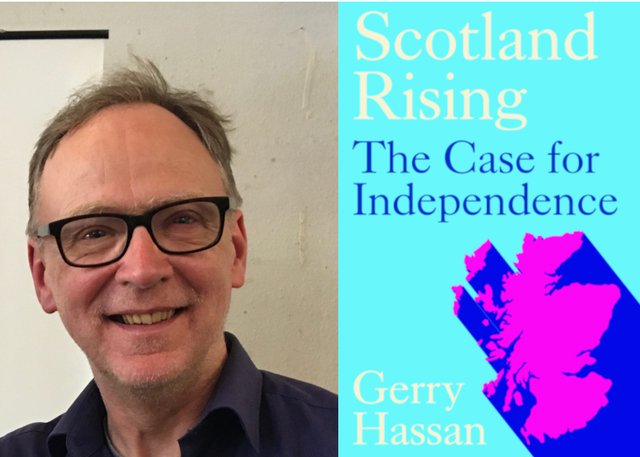 We are so excited to welcome Gerry Hassan, esteemed Professor of Social Change at Glasgow Caledonia University, to celebrate publication of his latest book, Scotland Rising: The Case for Independence.

The question of whether Scotland should remain a part of the United Kingdom has, even through the turbulence of the last three years, remained at the forefront of political discourse across the British Isles. Scotland Rising is a book for those who haven’t made up their minds about independence as well as those who have. The value of this book lies in the nuance it brings to an emotionally-ripe topic; bringing order to the seemingly inscrutable factors driving the desire amongst Scots for an explicit discussion about identity, public policy choices and their future in the UK. Instead of recycling tired arguments, Gerry aims to move beyond historical evaluations of Thatcherism, the SNP and the Tory government, and instead make a positive socio-economic and political case for independence.

Whether Gerry’s arguments convince us or not, their virtue lies in an ability to challenge and clarify our own thought. So come and join us for what is sure to be an enlightening evening with one of the most trusted, well-respected voices on Scottish independence.

Gerry Hassan is a writer, commentator and thinker about Scotland, the UK, politics and ideas. He is currently Professor of Social Change at Glasgow Caledonian University and was previously a Senior Research Fellow in contemporary Scottish history at Dundee University. Prior to that he has been Senior Research Fellow at the Institute of Public Policy Research Scotland was Research Fellow in cultural policy at the University of the West of Scotland where he completed and was awarded his PhD. Gerry has written and edited numerous books on Scotland and the wider world, including: The Strange Death of Labour Scotland (2012), A Better Nation: The Challenges of Scottish Independence (2022), Scotland the Bold (2016), and Scotland After the Virus (2020).