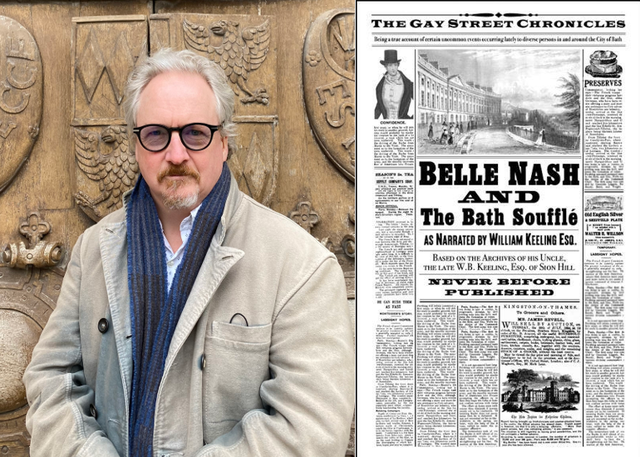 William Keeling is a former foreign correspondent of the Financial Times, best known for exposing a multi-billion-dollar corruption scandal in Nigeria that led to his summary deportation. He eventually left journalism for chocolate, becoming co-owner of the historic chocolate company Prestat. Like his late uncle, on whose bequeathed manuscripts the series is based, he too has a creative mind. Belle Nash and the Bath Souffle is the first in The Gay Street Chronicles series.

When Gaia Champion’s souffle fails to rise in 1830s Bath, it sets off a chain of events that overthrows the settled order.

Centred on the personality of local councillor and bachelor extraordinaire Bellerophon ‘Belle’ Nash, this first volume of The Gay Street Chronicles engages with social issues that were emerging in the early days of Queen Victoria’s reign and still require our close attention today.

A recurring cast of whimsical characters brings a gentle humour to the writing and to the strong feminist activism of Bath’s first Lady Magistrate.

Join us with William as we embark on a journey through Georgian Bath. It will begin at the bookshop before heading up through Gay Street and the Royal Crescent all the way to Camden Crescent.

We’ll meet at 10am for coffee and biscuits in the bookshop before we depart at 10:30am.