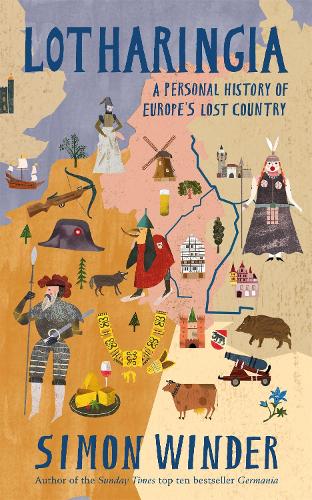 Hardback (unsigned) £20
Published 7th March 2019, 576 pages
Signed first edition £20
First edition, first printing, signed by the author
You’ll be able to choose Delivery or Click & Collect after you enter your address.
UK postage is £2.95, or free for orders over £60.

‘No Briton has written better than Winder about Europe’ Sunday Times

At the heart of western Europe lies a huge swath of land, stretching from the mud and fogs of the North Sea coast, down through countless market towns, ports, fortresses and ancient cathedrals, through a mass of river systems and forests, all the way to the great barrier of the Alps. Divided by their languages, religions and frontiers, everyone living there shares one thing: that they are inhabitants of a lost part of Europe - Lotharingia.

In his highly entertaining new book Simon Winder tells the story of this ghostly but persistent presence. In AD 843, the three surviving grandsons of the great Emperor Charlemagne met at Verdun. After years of bitter squabbles over who would inherit the family land, they finally decided to divide the territory and go their separate ways. In a moment of staggering significance, one grandson inherited what became France, another Germany and the third Lotharingia, the chunk that initially divided the other two chunks: ‘the lands of Lothar’. The dynamic between these three great zones has dictated much of our subsequent fate.

Lotharingia is a history of this in-between land and joins the equally fascinating Germania and Danubia in Simon Winder’s personal exploration of Europe. In this beguiling, hilarious and compelling book we retrace how both from west and from east any number of ambitious characters have tried and failed to grapple with these people. Over many centuries, not only has Lotharingia brought forth many of Europe’s greatest artists, inventors and thinkers, but it has also reduced many a would-be conqueror to helpless tears of rage and frustration.

‘He is a master of the art of making history both funny and fun, with never any loss of seriousness. Once again he brings Germany bouncing back to life.’ Simon Jenkins, author of A Short History of Europe.