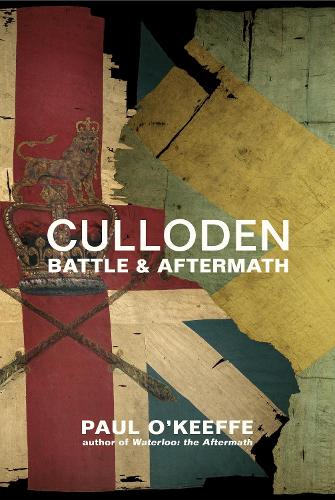 Charles Edward Stuart’s campaign to seize the British throne on behalf of his exiled father ended with one of the quickest defeats in history: on 16 April 1746, at Culloden, his 5,000-strong Jacobite army was decisively overpowered in under forty minutes. Its brutal repercussions, however, endured for months and years, its legacy for centuries.

Paul O’Keeffe follows the Jacobite army, from its initial victories over Hanoverian troops at Prestonpans, Clifton and Falkirk to their calamitous defeat on the field of Culloden. He explores the battle’s aftermath which claimed the lives, not only of helpless wounded summarily executed and fugitives cut down by pursuing dragoons, but also of civilians slaughtered by vengeful government patrols as they ‘pacified’ the Highlands. He chronicles the wild, nationwide celebration greeting news of the government victory, the London stage catering to patriotic fervour with new songs like ‘God Save the King’, popular musical theatre, and operas by Gluck and Handel.

Meanwhile, the public was also treated to the grimmer spectacle of Jacobite prisoners, tried for high treason, paying for their participation on block and gibbet throughout the country. Many others - granted ‘the King’s mercy’ - suffered the lingering fate of forced labour on fever-ridden plantations in the West Indies and Virginia.

O’Keeffe reveals the unexpected consequences of the rising - mapping the Scottish Highlands to aid military subjugation would eventually lead to the foundation of the Ordnance Survey - and traces the later careers of the battle’s protagonists: the Duke of Cumberland’s transformation from idolised national hero to discredited ‘butcher’; Charles Edward Stuart’s from ‘Bonny Prince’ to embittered alcoholic invalid.

While in the long term the doomed Stuart cause acquired an aura of romanticism, the Jacobite Rising of 1745-46 remains one of the most bloody and divisive conflicts in British domestic history, which resonates to this day.