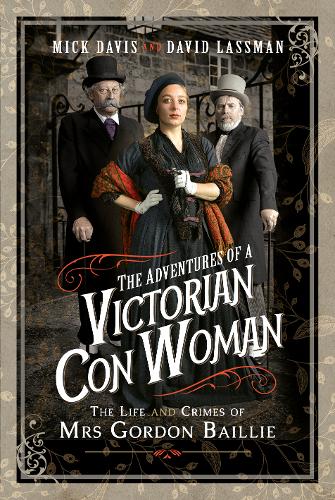 The Adventures of a Victorian Con Woman: The Life and Crimes of Mrs Gordon Baillie

by Mick Davis and David Lassman

‘The story of Mrs. Gordon Baillie is stranger than anything to be met with in the field of fiction.’ Mrs. Gordon Baillie, known throughout her life as Annie, was born in the direst poverty in the small Scottish fishing town of Peterhead in 1848. Illegitimate and illiterate her beauty and intelligence nevertheless enabled her to overcome her circumstances and become a charming and wealthy socialite living a life of luxury whilst raising money for worthy causes and charitable works. Behind her supposed perfect and contented life, however, lay one of the most notorious and compulsive swindlers of the Victorian Age. Her fraudulent fundraising and larger-than-life schemes played out across four decades and three continents, Europe, America and Australasia, and involved land owners crofters, aristocrats, politicians, bankers, socialist revolutionaries, operatic stars and the cultural icons of the day. She became mistress to a rich aristocrat, married a world-renowned male opera singer and later took as a lover a vicar’s son with anarchist tendencies. For most of her ‘career’ she kept one step ahead of the law and her nemesis, Inspector Henry Marshall of Scotland Yard, but finally becoming undone through her own compulsion for petty theft, despite her amassed fortune. During her life she used more than 40 aliases, produced four children and spent her way through millions of ill-gotten pounds, dollars and other currencies. But at the turn of the twentieth century, her notoriety was such that she took refuge in America and disappeared from history.

The Adventures of a Victorian Con Woman: The Life and Crimes of Mrs Gordon Baillie
by Mick Davis and David Lassman