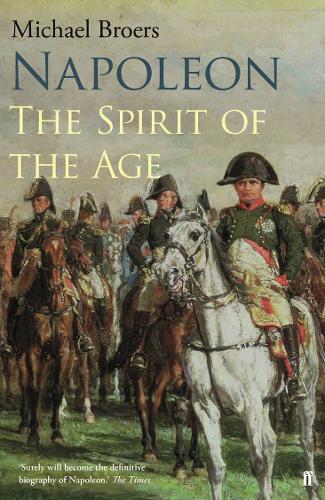 Napoleon Volume 2: The Spirit of the Age

Hardback (unsigned) £30
Published 1st March 2018, 560 pages
Signed first edition £30
First edition, first printing, signed by the author
You’ll be able to choose Delivery or Click & Collect after you enter your address.
UK postage is £2.95, or free for orders over £60.

Napoleon’s life reached its most extraordinary stage, between 1805 and 1810. In 1805, Napoleon was suddenly at war with Britain, Russia, and Austria. He mobilised all his power to confront them, unleashing his magnificent Grande Armee. Its first, resounding victory at Austerlitz was followed by a whirlwind of campaigns, bringing Napoleon and his men to the borders of Russia. These stunning triumphs made Napoleon the master of the continent, but they left Britain unbowed. In the years that followed, this struggle with Britain came to dominate Napoleon’s actions, leading him into the bloodbath of the Spanish Peninsular war, and his attempt to blockade Europe against British commerce. In 1809, Austria launched yet another assault on him. By 1810, Napoleon had routed them, and divorced Josephine in order to marry the daughter of the Austrian Emperor. But at a time of such victory, his own family was torn asunder in the struggle for survival.

Napoleon Volume 2: The Spirit of the Age
by Michael Broers