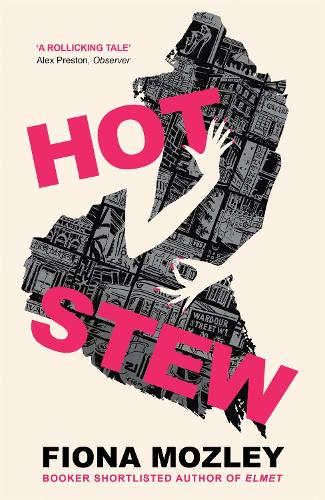 Hot Stew: the new novel from the Booker-shortlisted author of Elmet

‘ A dazzling Dickensian tale … In an age when so many novelists of Mozley’s generation take refuge in the dystopian, she has reinvigorated large-scale social realism for our times ‘ Guardian , Book of the Day

‘Where the mystical, elemental qualities of Elmet earned it comparisons with Lawrence and Hardy, her second novel is a sprawling urban comedy more likely to recall Ben Jonson or Dickens’ Daily Telegraph

‘Did you know in Tudor times all the brothels were south of the river in Southwark and it was only much later that they moved up this way to Soho. Stews, they were called then.’

On a corner, sits a large townhouse, the same as all its neighbours. But this building hosts a teeming throng of rich and poor, full from the basement right up to the roof terrace. Precious and Tabitha call the top floors their home but it’s under threat; its billionaire-owner Agatha wants to kick the women out to build expensive restaurants and luxury flats. Men like Robert, who visit the brothel, will have to go elsewhere. Those like Cheryl, who sleep in the basement, will have to find somewhere else to hide after dark. But the women won’t go quietly. Soho is their turf and they are ready for a fight.

‘ A complex mosaic of urban life … The Soho Mozley captures with such intensity is not a mere locality. It is a microcosm of swarming humanity’ The Times

‘ At its best, it recalls the kind of capacious, rollicking satires Britain produced in and around the Thatcher era - ambitious, scathing and damn good fun’ TLS

Hot Stew: the new novel from the Booker-shortlisted author of Elmet
by Fiona Mozley