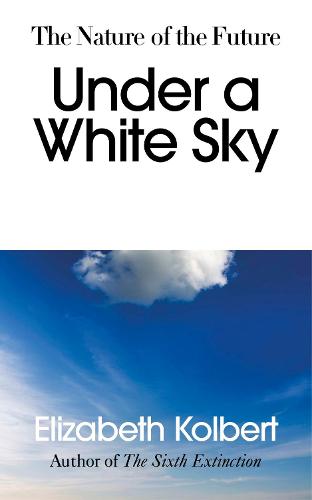 Under a White Sky: The Nature of the Future

The author of the international bestseller The Sixth Extinction returns to humanity’s transformative impact on the environment, now asking: after doing so much damage, can we change nature, this time to save it?

Elizabeth Kolbert has become one of the most important writers on the environment. Now she investigates the immense challenges humanity faces as we scramble to reverse, in a matter of decades, the effects we’ve had on the atmosphere, the oceans, the world’s forests and rivers - on the very topography of the globe.

In Under a White Sky , she takes a hard look at the new world we are creating. Along the way, she meets biologists who are trying to preserve the world’s rarest fish, which lives in a single tiny pool in the middle of the Mojave desert; engineers who are turning carbon emissions to stone in Iceland; Australian researchers who are trying to develop a ‘super coral’ that can survive on a hotter globe; and physicists who are contemplating shooting tiny diamonds into the stratosphere to cool the earth, changing the sky from blue to white.
One way to look at human civilisation, says Kolbert, is as a ten-thousand-year exercise in defying nature. In The Sixth Extinction , she explored the ways in which our capacity for destruction has reshaped the natural world. Now she examines how the very sorts of interventions that have imperilled our planet are increasingly seen as the only hope for its salvation. By turns inspiring, terrifying and darkly comic, Under a White Sky is an utterly original examination of the challenges we face.

Under a White Sky: The Nature of the Future
by Elizabeth Kolbert