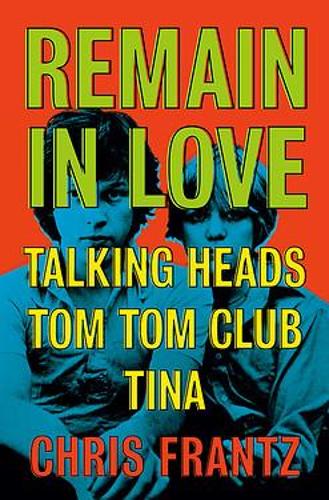 Hardback (unsigned) £20
Published 21st July 2020, 400 pages
Signed first edition £25
First edition, first printing, signed by the author
You’ll be able to choose Delivery or Click & Collect after you enter your address.
UK postage is £2.95, or free for orders over £60.

‘As the Brits say: I’m gobsmacked. I devoured this book… one of the most potent examples of living the dream’ Debbie Harry

‘A great drummer who has written a great book’ Bill Murray

‘A revealing inside account of the highs and lows of a band who looked and sounded like nobody else’ Olivia Laing, Guardian

Forty years on from the release of their era-defining album Remain in Light , Chris Frantz’s memoir tells the story of Talking Heads and Tom Tom Club.

Chris Frantz met David Byrne at the Rhode Island School of Art & Design in the early 1970s. Together - and soon with Frantz’s future wife, Tina Weymouth - they formed Talking Heads and took up residence in the grimy environs of Manhattan’s Lower East Side, where their neighbours were Patti Smith, William Burroughs and a host of proto-punk artists who now have legendary status. Building an early audience and reputation with many performances at CBGB alongside the Ramones, Television and Blondie, Talking Heads found themselves feted by Warhol (who famously referred to them as ‘Talking Horses’) and Lou Reed, and signed to Sire Records. A band whose sensibility was both a part of, and apart from, punk, their early albums quickly became classics; until the Brian Eno produced masterpiece Remain in Light , saw them explode. Soon, however, relations within the band started to become strained as a band that had always operated democratically lost its team ethic. Chris and Tina started recording as Tom Tom Club in the early ‘80s; in the process creating a hybrid of funk, disco, pop, electro and world music that would have a huge impact on the club scene around the world.

Warm and candid, funny and heartfelt, Remain in Love charts the rise and fall of a band - in a decade they came to define - who combined the sensibility of artists with visionary songwriting talents. It is also the story of the once-in-a-lifetime love story and creative partnership between Chris and Tina Weymouth, one of the greatest rhythm sections to electrify the pop stage.

Remain in Love
by Chris Frantz