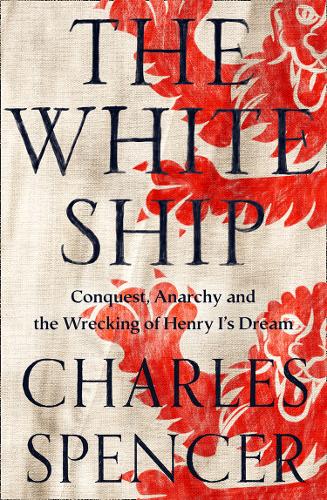 The White Ship: Conquest, Anarchy and the Wrecking of Henry I's Dream

Hardback £25
Published 17th September 2020, 352 pages
Signed first edition £25
First edition, first printing, signed by the author
You’ll be able to choose Delivery or Click & Collect after you enter your address.
UK postage is £2.95, or free for orders over £60.

‘As gripping as any thriller. History doesn’t get any better than this’ BILL BRYSON

‘The medieval Titanic … Charles Spencer explores with brilliance … the gripping, tragic story of the White Ship … and brings it to vivid and thrilling life in this superb book’ KATE WILLIAMS

PICKED AS A BEST BOOK OF THE YEAR 2020 BY THE DAILY TELEGRAPH , THE GUARDIAN , THE DAILY MAIL AND THE DAILY EXPRESS .

The sinking of the White Ship on the 25th November 1120 is one of the greatest disasters that England has ever suffered. Its repercussions would change English and European history for ever.

King Henry I was sailing for England in triumph after four years of fighting the French. Congregating with the king at the port of Barfleur on that freezing night was the cream of Anglo-Norman society, including the only legitimate heir to the throne. By 1120, Henry was the most formidable ruler in Europe with an enviable record on the battlefield, immense lands and wealth and unprecedented authority in his kingdoms. Everything he had worked for was finally achieved, and he was ready to hand it on to his beloved son, William AEtheling.

Henry I and his retinue set out first. The White Ship - considered the fastest afloat - would follow, carrying the young prince. Spoilt and arrogant, William had plied his comrades and crew with drink from the minute he stepped aboard. It was the middle of the night when the drunken helmsman rammed the ship into rocks. There would be only one survivor from the gilded roll call of passengers…

Charles Spencer evokes this tragic and brutal story of the Normans from Conquest to Anarchy. With the heir dead, a civil war of untold violence erupted, a game of thrones which saw families turn in on each other with English and Norman barons, rebellious Welsh princes and the Scottish king all playing a part in a bloody, desperate scrum for power.

The White Ship: Conquest, Anarchy and the Wrecking of Henry I's Dream
by Charles Spencer