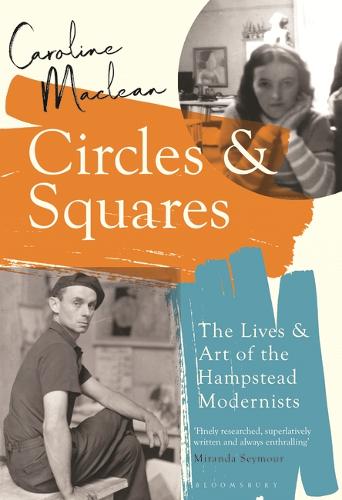 Circles and Squares: The Lives and Art of the Hampstead Modernists

‘Bloomsbury’s dead. Long live Hampstead’ Daily Telegraph ‘Riveting … [The book] fizzes with the creative energy of the times - Maclean is the perfect biographer’ Financial Times ‘From Bauhaus to bohemian love … the intricate lives and art of interwar modernists are captured in this hugely enjoyable and well-plotted book’ Guardian A spellbinding portrait of the Hampstead Modernists, threading together the lives, loves, rivalries and ambitions of a group of artists at the heart of an international avant-garde. Hampstead in the 1930s. In this peaceful, verdant London suburb, Barbara Hepworth and Ben Nicholson have embarked on a love affair - a passion that will launch an era-defining art movement. In her chronicle of the exhilarating rise and fall of British Modernism, Caroline Maclean captures the dazzling circle drawn into Hepworth and Nicholson’s wake: among them Henry Moore, Paul Nash, Herbert Read, and famed emigres Walter Gropius, founder of the Bauhaus, and Piet Mondrian, blown in on the winds of change sweeping across Europe. Living and working within a few streets of their Parkhill Road studios, the artists form Unit One, a cornerstone of the Modernist movement which would bring them international renown. Drawing on previously unpublished archive material, Caroline Maclean’s electrifying Circles and Squares brings the work, loves and rivalries of the Hampstead Modernists to life as never before, capturing a brief moment in time when a new way of living seemed possible. United in their belief in art’s power to change the world, her cast of trailblazers radiate hope and ambition during one of the darkest chapters of the twentieth century. ‘[The book evokes] a sense of an era in which it was bliss to be alive, and in love, and bursting with creativity and the possibilities of making life and art in new ways’ Literary Review ‘Caroline Maclean explores this forgotten interlude as if travelling, supping tea, from door to door … [An] impeccably researched social history’ The i paper

Circles and Squares: The Lives and Art of the Hampstead Modernists
by Caroline Maclean