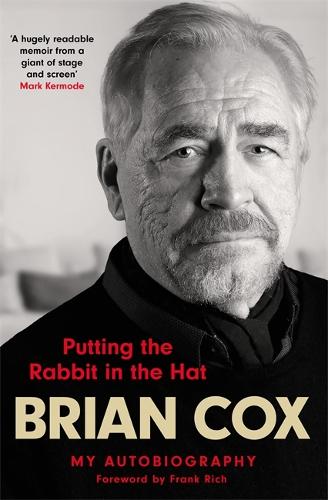 Putting the Rabbit in the Hat: the fascinating memoir by acting legend and Succession star

Hardback (unsigned) £20
Published 28th October 2021, 384 pages
Signed first edition £20
First edition, first printing, signed by the author
You’ll be able to choose Delivery or Click & Collect after you enter your address.
UK postage is £2.95, or free for orders over £60.

The long-awaited memoir by movie and theatre legend, Brian Cox.

A Guardian , Times , Sunday Times and Independent Book of the Year

‘A life well lived and a story well told. From first page to last Brian Cox the great actor is Brian Cox the great storyteller, and nobody is spared his sharp eye and his caustic wit, himself and some big Hollywood names included’ - Alastair Campbell

‘Funny and irreverent’ - The Times

From Titus Andronicus with the RSC to media magnate Logan Roy in HBO’s Succession , Brian Cox has made his name as an actor of unparalleled distinction and versatility. We know him on screen, but few know of his extraordinary life story.

Growing up in Dundee, Scotland, Cox lost his father when he was just eight years old and was brought up by his three elder sisters in the aftermath of his mother’s nervous breakdowns and ultimate hospitalization. After joining the Dundee Repertory Theatre at the age of fifteen, you could say the rest is history - but that is to overlook the enormous graft that has gone into the making of the legend we know today.

This is a rags-to-riches life story like no other - a seminal autobiography that both captures Cox’s distinctive voice and his very soul. Rich in emotion and meaning, with plenty of laughs along the way, it will be a classic in the vein of The Moon’s a Balloon by David Niven and What’s It All About by Michael Caine.

Putting the Rabbit in the Hat: the fascinating memoir by acting legend and Succession star
by Brian Cox