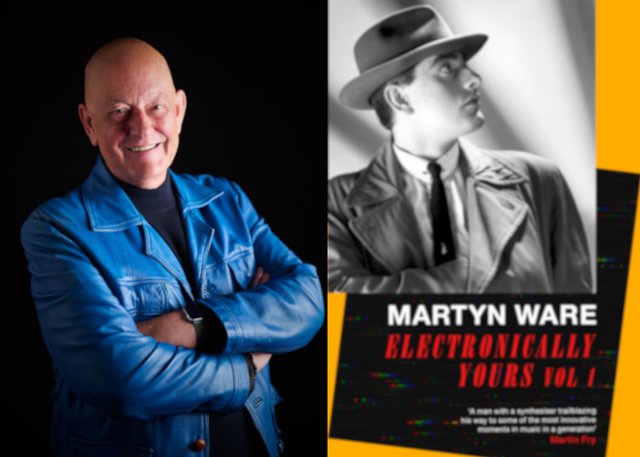 It gives us great joy to announce an event with another member of musical royalty: Martyn Ware. Martyn joins us this September to discuss the first volume of his autobiography, Electronically Yours. This is an evening not to be missed by any music lover!

As a founding member of The Human League and Heaven 17, Martyn was among some of the most pioneering musicians of the 1980s.  A young lad from the heart of post-war Sheffield, Ware formed The Human League a few years out of school in his early twenties. Described by David Bowie as ‘the future of music’, it wasn’t long before the band become known for their innovative and infectiously catchy singles such as ‘Being Boiled’, touring with the likes of Siouxsie and the Banshees and Iggy Pop before Ware’s departure. Heaven 17 followed suit, with their soon-to-be classic albums, Penthouse & Pavement and The Luxury Gap, featuring several colossal hits. Ground-breaking icons in new wave and synth pop, both groups remain some of the biggest-selling bands across the UK and worldwide.

In Electronically Yours, Martyn takes us through his incredible route to stardom; from his austere upbringing in various council houses and close teenage friendship with former-bandmate Phil Oakey, to the white-hot experimentation in the ‘Synth Britannia’ era and his production career, which allowed him to work with some of the world’s greatest singers, including Tina Turner. But it’s not just his life inside the industry which is compelling; a proud socialist, Martyn writes poignantly about politics – how it can be a soulful, personal, moral duty – and its role in his music creation and Britain today. With charming meditations on culture, humour, travel and sport, Martyn also shares his love of 60s films, explains why Venice is the most beautiful city in the world, and reveals how Sheffield Wednesday has forever been his first and eternal passion.

A huge page-turner and always warmly told, Electronically Yours sees Martyn talk candidly for the very first time about his extraordinary journey. Discover amusing anecdotes, raw confessions, and moving reflections of a life well and truly lived at the height of the music industry.

So come and join us in celebrating Martyn’s inimitable music legacy!