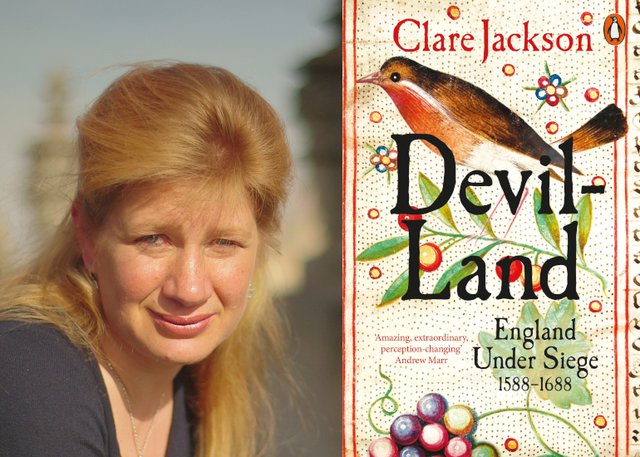 This October, we are thrilled to welcome Dr Clare Jackson to the Bookshop, to celebrate her Wolfson History Prize-winning book, Devil-Land: England Under Siege, 1588-1688 - now in paperback. This exciting and engaging analysis of an exceptionally turbulent century in English history won immediate praise, being selected as a Book of the Year by The Times, New Statesman, Telegraph, and Times Literary Supplement.

To those beyond its frontiers, England was Devil-Land: a place of heresy, regicide, and inadequate governance. Beginning in 1588, when Spanish ships gathered to invade England, Devil-Land explains the following century as one of crisis. With fantastic attention to detail, it compares perceptions, within and without England, of well-known historical episodes - Armada, Gunpowder Plot, Civil War, Restoration, and more - before its conclusion with the arrival of a Dutchman on English shores, bringing a new regime in his wake.

In support of this year’s winner, the Wolfson History Prize judges called Devil-Land “a masterpiece” which “provides fresh insights by looking at England through European eyes”. Writing in The Sunday Times, historian John Adamson asserted that seventeenth-century England “will never look quite the same again”, thanks to the “big historical advance” Devil-Land has made. See this advance for yourself, as Clare shares details from her book, and the crises it examines, in the Bookshop. Do join us!

Dr Clare Jackson is Senior Tutor at Trinity Hall, University of Cambridge. After her school days in Edinburgh, Clare read History at Sidney Sussex College, Cambridge, before completing her M.Phil at the University of Aberystwyth. She returned to Sidney Sussex College for her doctoral research on royalist ideas in late-seventeenth-century Scotland. A respected academic, Clare is the author of Restoration Scotland, 1660-1690: Royalist politics, religion and ideas (2003) and Charles II (2016) in the Penguin Monarchs series, and is recognisable among popular audiences both from the BBC2 television series she presented, The Stuarts (2014) and The Stuarts in Exile (2015), and from her several appearances on Radio 4’s In Our Time.