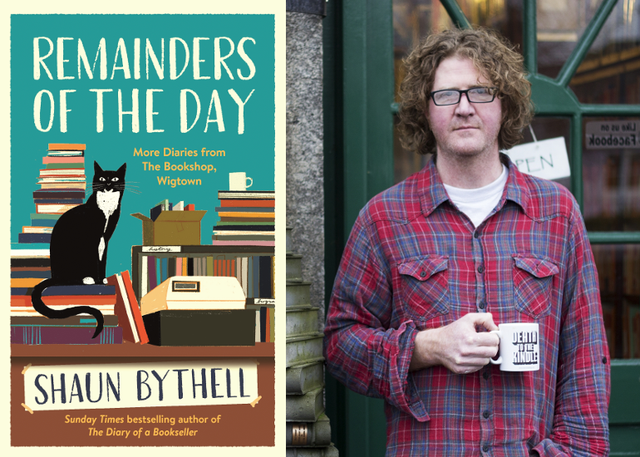 Shaun Bythell has run The Bookshop in Wigtown since 2001. His internationally bestselling books The Diary of a Bookseller, Confessions of a Bookseller and Seven Kinds of People You Find in Bookshops have been translated into over thirty languages. His passion for bookselling is matched only by his sense of despair for its future.

Now he’s back and joins us in our very own bookshop for the latest instalment in his diary series, Remainders of the Day.

The Bookshop in Wigtown is a bookworm’s idyll – with thousands of books across nearly a mile of shelves, a real log fire, and Captain, the bookshop cat.

You’d think after twenty years, owner Shaun Bythell would be used to the customers by now. Don’t get him wrong – there are some good ones among the antiquarian porn-hunters, die-hard Arthurians, people who confuse bookshops for libraries and the toddlers just looking for a nice cosy corner in which to wee. He’s sure there are. There must be some good ones, right?

Filled with the pernickety warmth and humour that has touched readers around the world, stuffed with literary treasures, hidden gems and incunabula, Remainders of the Day is Shaun Bythell’s latest entry in his bestselling diary series.

Join us for an evening full of laughter as Shaun shares his insight into the highs and lows of life as a bookseller – plus his thoughts about that Kindle you bought during lockdown.