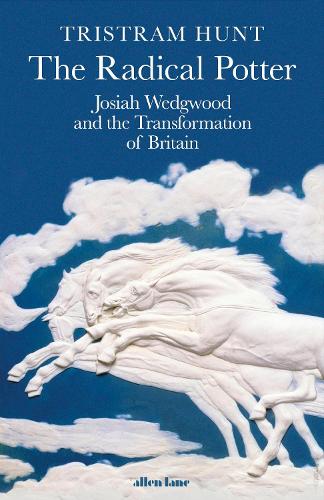 The Radical Potter: Josiah Wedgwood and the Transformation of Britain

Hardback (unsigned) £25
Published 2nd September 2021, 352 pages
Signed first edition £25
First edition, first printing, signed by the author
You’ll be able to choose Delivery or Click & Collect after you enter your address.
UK postage is £2.95, or free for orders over £60.

A spectacular new biography of the great designer, entrepreneur, abolitionist and beacon of the Industrial Revolution, from acclaimed historian and Director of the Victoria and Albert Museum, Tristram Hunt

Josiah Wedgwood, perhaps the greatest English potter who ever lived, epitomized the best of his age. From his kilns and workshops in Stoke-on-Trent, he revolutionized the production of ceramics in Georgian Britain by marrying technology with design, manufacturing efficiency and retail flair. He transformed the luxury markets not only of London, Liverpool, Bath and Dublin but of America and the world, and helping to usher in a mass consumer society. Tristram Hunt calls him ‘the Steve Jobs of the eighteenth century’.

But Wedgwood was radical in his mind and politics as well as in his designs. He campaigned for free trade and religious toleration, read pioneering papers to the Royal Society and was a member of the celebrated Lunar Society of Birmingham. Most significantly, he created the ceramic ‘Emancipation Badge’, depicting a slave in chains and inscribed ‘Am I Not a Man and a Brother?’ that became the symbol of the abolitionist movement.

Tristram Hunt’s hugely enjoyable new biography, strongly based on Wedgwood’s notebooks, letters and the words of his contemporaries, brilliantly captures the energy and originality of Wedgwood and his extraordinary contribution to the transformation of eighteenth-century Britain.

The Radical Potter: Josiah Wedgwood and the Transformation of Britain
by Tristram Hunt