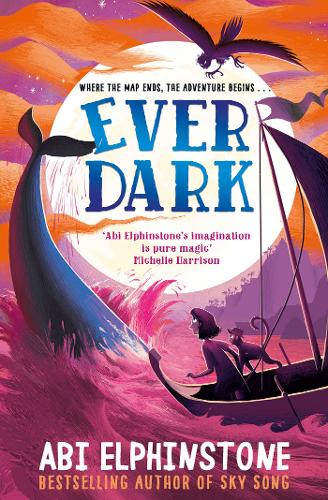 The stunning prequel to Abi Elphinstone’s mesmerising The Unmapped Chronicles series. Magic, adventure, and a whole new world is waiting to be discovered! The perfect series for adventurers aged 9+ and fans of Michelle Harrison, Piers Torday and Jamie Littler. The Unmapped Chronicles will not only leave children entertained, but will also empower them to battle climate change and environmental issues.

Where the map ends, the adventure begins …

It is midnight in Crackledawn - a midnight full of magic. Sea dragons stir in the depths of the ocean, silver whales surface beneath the moon and sand goblins line the shores. Everyone is waiting for the phoenix, the guardian of the kingdom’s magic, to rise up from the forests of Everdark .

But there is no sign of the phoenix tonight. Something else surges up out of Everdark instead: a harpy bent on stealing Crackledawn’s magic.

It is up to an eleven-year-old girl called Smudge and a grumpy monkey called Bartholomew to set sail beyond the legendary Northswirl and stop the harpy before it’s too late.

So, grab your compass and roll down your sail - the first adventure in THE UNMAPPED CHRONICLES is about to begin …

Praise for Abi Elphinstone!
‘Imaginative, adventurous and wonderful’ Robin Stevens, author of A Murder Most Unladylike series
‘The Unmapped Chronicles series is irresistible’ Lauren St John, author of The White Giraffe
‘Abi Elphinstone has created a complete world so believably and effortlessly, I can only marvel’ Piers Torday, author of The Last Wild Trilogy
‘Brimming with enchantment and adventure’ Catherine Doyle, author of The Storm Keeper’s Island
‘Abi Elphinstone is proving to be a worthy successor to CS Lewis’ The Times